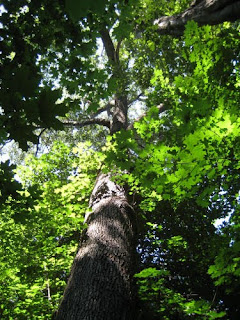 A post that I wrote a few weeks ago on a project to restore an urban old-growth forest in my neighborhood continues to receive some hits and comments, so I think I'll give an update.
Margaret just asked if I could say more about nature and vulnerability to decline.
My sense is that there are several ways of looking at nature--both here, in this Grove, and elsewhere. In one story, nature is a magnificent force who looks after herself. Although we humans can do things to harm natural settings, in time they eventually recover. Damage is not permanent. And at the same time, if we try to tame nature, she will reassert herself. In the case of this very old and very tall piece of forest, the forces of nature seem strong and our influence seems weak. The trees are tall and old. When they fall, that's just nature's development. The vegetation is at times dense and healthy. There are many chipmunks and squirrels and insects and birds. In this story, as long as there is no asphalt, there is nature, and she is looking after herself.
But another way of looking at this same forest pays attention to some details: the young trees are mostly escapees from garden plantings, as are many of the shrubs and herbs. Besides the mature trees, the plants that looks so vigorous and dense are Norway maples and black swallowwort and English ivy. The trillium are gone, the mayapples are mostly gone. In this story, there is greenery, and in one sense it is natural--and vigorous! But in another sense, it is the result of human culture, and these are the same plants that grow everywhere else--in my yard and in the drainage ditches. And we see that even things that seem permanent--the dirt we walk on--winds up in the storm sewers as erosion takes over when the roots of growing things are not holding it stable.
Margaret, I like your idea about focusing on wildflowers. I've seen that be a successful strategy both where I grew up, in Texas, and also where I now work in western New York. In the 1980's a campus group planted trillium and some other spring ephemerals and now they are naturalized.
In the last few weeks the city foresters have proposed a plan to run a trial of removing the invasive Norway maple saplings in some constrained areas. This sounds like a good plan to me. It proceeds decisively but also slowly enough to find out if the intervention will have the desired effect in terms of achieving some control but also not impacting the aesthetics of the grove. My concern is just that the saplings are ID'd properly since there is a mix of the native sugar maples and the invasive Norway maples. These two kinds of trees can be hard to distinguish even though they aren't closely related--especially in early spring.
Posted by Evelyn Brister at 11:11 AM

You may be interested to see how Michael Pollan handles this. His syllabus at Berkeley is posted at http://www.michaelpollan.com/syllabus_gettingover.pdf