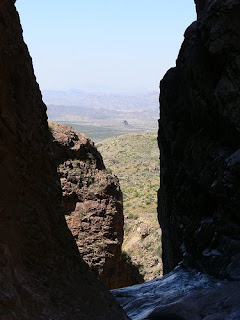 I've been blogging about women in philosophy but have mostly been thinking about the "problem of people and parks."
A recent (July 2009) article by Emily Wakild in Environmental History speaks to a related issue: the history of park planning along the U.S.-Mexico border.
In the 1930's, Mexican and U.S. officials tried to plan an international park on the southern U.S. border which would be analogous to the U.S.-Canada Glacier Waterton International Peace Park. The planning ultimately came to naught, partly because the U.S. insisted on locating the park in a place that would be inaccessible to Mexican tourists.
What's interesting about the article is that it makes explicit the values that have supported the formation of U.S. national parks and examines the ways these values differ in another culture. The U.S. national parks favor locations of unique grandeur and untouched forests, often in remote locations. Mexican national parks, on the other hand, favored locations that offered easy access to visitors, which had cultural meaning, and which were in need of reforestation.
This strikes me as similar to the difference in the U.S. between national parks and state parks. While national parks act as symbols of American uniqueness and rugged beauty--and have been linked to economic privilege--state parks are accessible, are a way of conserving diverse lands, and embody democratic mingling of classes.
It's interesting to get this historical view on what are still current questions of land use and land preservation. Does preservation require eliminating other land uses? Does tourism aid or inhibit preservation? Are conservation goals better served by setting aside the wildest lands or by targeting resources to areas that can benefit from restoration of watersheds or forests? How does park creation further political goals and goals of democratic participation? Answering such questions often demands impossible answers, such as placing a valuation on symbolism and comparing the value of a place as national symbol to its use value.
Posted by Evelyn Brister at 10:53 AM 2 comments:

Women Philosophers: Then and Now

Feminist Philosophers notices and re-posts an article from the Chronicle of Higher Education on women in philosophy.
It's marvelous to see articles on this worry of ours appear so prominently (and, it seems, more frequently). Especially since it is not uncommon for my colleagues in other humanities and social sciences to be utterly and completely surprised when they find out that the gender make-up of my department is typical for the discipline as a whole. (The economics department down the hall is the same size but has more women.)
One thing we need to (and have been) doing is to 1) identify (possible) causes of the gender disparity; 2) identify strategies to remediate it; 3) work to see these through; and 4) find ways of evaluating their success.
Regan Penaluna, the article's author, is clearly committed to doing this. Having identified the male (and sometimes misogynist) content of philosophy classes as a possible cause, she's writing a book on early women philosophers. The continued entrenchment of a canon in philosophy is a clear difference between our classes and what's going on in English Lit!
At the same time that we pursue strategies to diversify the authors and content that we teach (How many women were on the last syllabus you put together?), I think it's vital to address possible social causes.
Posted by Evelyn Brister at 4:57 PM 2 comments:

Richard Zach points to two reports from the National Academies which could be useful in understanding the gendered participation in philosophy and may suggest or vet strategies for change. He writes:

For background data (not in philosophy, but in science and engineering) on research on gender differences in aptitude, patterns and mechanisms of discrimination, trends, etc., I can only recommend again the definitive report of the National Academies' Committee on Maximizing the Potential of Women in Academic Science and Engineering from 2007:

Beyond Bias and Barriers: Fulfilling the Potential of Women in Academic Science and Engineering

Gender Differences at Critical Transitions in the Careers of Science, Engineering, and Mathematics Faculty

It's instructive to compare philosophy to mathematics: roughly the same numbers, but in mathematics it has been improving (31% women math PhDs in 2008 vs 24% 10 years earlier) while in philosophy the numbers have remained around 28% for a while.

Posted by Evelyn Brister at 12:46 PM No comments:

...this time with style.
I do get weary of the discussion about the dearth of women in philosophy, but the problem seems fresh and intriguing once again when covered by The Edge of the American West. Not to mention tractable. As Rosie says, "We Can Do It!"
Aha, these posts remind me that it's time for the yearly Digest of Education Statistics Update. (See the sidebar to the left for earlier installations.) 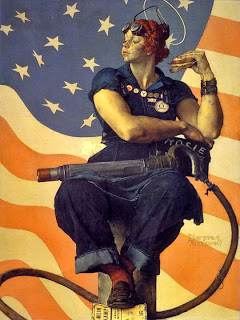 Not Discrimination, But Choice

Since the article about women philosophers in the Philosophers' Magazine and its citation by a NYTimes blog, plenty of analysis (as well as not quite so analytic commentary) has brought welcome attention to our discipline's gender disparity--a disparity that gets the attention of government agencies in disciplines more essential to technology and security than philosophy is.

I've heard it all: women aren't as aggressive (there is an inherent connection between theoretical reasoning and aggression?), women prefer jobs that aren't this hard, women just aren't as good at abstract thought...
All are theories that should not be ignored, but not prioritized either...not when there is such good evidence (from our discipline and others) for the role of social factors.
Jenny Saul blogs it well here.
In addition to the social factors covered in that post, the Feminist Philosophers blog has over the years cataloged many a conference and edited book that inexplicably includes only male authors. JJ suggests that networking may be not just the problem but also the solution.
Posted by Evelyn Brister at 10:09 PM No comments:

This just in: an article in "The Philosophers' Magazine" reports that a survey of 20 British philosophy departments reveals that only about 20% of full-time faculty are women, much less than in history or psychology or literature departments. A survey of 8 American departments came up with 22% women.
(This is a good point to look toward the sidebar, over there to the left, which has links to more thorough statistics and some of my own analysis. Julie van Camp reliably tracks women in 54 US PhD granting philosophy departments, and her current statistic is 19.6% of full-time faculty are women. Another nice set of statistics is on Sharon Crasnow's blog.)
From the article:

Helen Beebee, a University of Birmingham lecturer and director of the British Philosophical Association (BPA), says her impression is that there are roughly equal numbers of men and women graduating with good bachelor degrees in philosophy and that the numbers of women start to drop off at MA level and then again at PhD level.

Jennifer Saul, a Sheffield University lecturer...says that relative to post-graduate students, there is a significant drop in the number of women going on to become temporary lecturers. She says that number decreases again at permanent and more senior levels of academic philosophy and agrees that an aggressive culture may be a contributing factor. “I think that very combative ‘out to destroy the speaker’ sort of philosophy is something that a lot of women find uncomfortable,” she says. “But I wouldn’t want to say it’s just a problem for women – I think it’s a problem for men and a problem for philosophy because I don’t think it’s a good way to do philosophy.”

Beebee says people might see the fact that so few women choose to pursue a career in philosophy as unproblematic if there is no overt sexism going on but argues that “sustaining a culture whose effect is to exclude women is arguably a form of discrimination, even if the discrimination is neither conscious nor based on unconscious assumptions. And if women who would have made really good philosophers are not entering the profession, the philosophy that’s being done overall is not as good as it would have been if they had.”

I would only add that the U.S. Department of Education statistics suggest that the gender disparity, at least in the US, does begin at the undergraduate level. Women have only been earning about 30% of bachelor's degrees in philosophy, though they earn more than half of bachelor's degrees overall in all subjects. That difference between women and men is maintained and only slightly widened for master's and doctorate degrees. The gap widens again, and more significantly, at the stages of hiring and tenure.

Much has been done in STEM disciplines to decrease gender disparity. Success in engineering, math, physics, and other sciences has required concerted efforts from universities, professional organizations, and foundations, together with government support in the form of funding research and recruitment programs. The discipline of philosophy has received no similar level of support, and our professional organization has not so far even been able to collect data on hiring and on departmental make-up.

I am skeptical that our discipline will reach contemporary standards of fairness and gender inclusivity until addressing the problem of gender disparity is prioritized by the profession at large--men as well women.
Posted by Evelyn Brister at 12:39 PM 4 comments: