OK, ok, so I accuse others of being dry and having "the little professor" syndrome and then a time comes when I look back at my posts and they're just so tedious. We get 6 months into the academic year and at odd moments I find myself thinking "Is this a teaching moment?" or "A rubric/argument analysis/epoché is called for here" or some other inexcusable cliché.
And that, my friends, is why God made sarcasm. Let's take a break for some feminist humor:

Yet Another Lady Determined To Be Secretly A Dude, Based on Job

A Different Spin on Stolen Ideas

Today I'm grading final exams. They take the form of a take-home essay, and I'm hoping that there won't be any cases of plagiarism. But here's a case of theft that is much more dramatic:
Descartes Letter Found, Therefore It Is
By PATRICIA COHEN
Published: February 25, 2010
A letter by René Descartes stolen from the Institut de France in the mid-1800s has turned up at Haverford College in eastern Pennsylvania.
Posted by Evelyn Brister at 10:47 AM 1 comment: 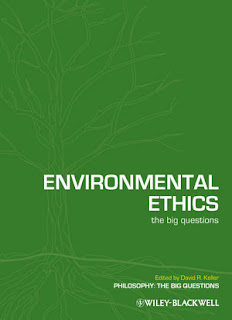 I just received another anthology of readings prepared for use in an environmental philosophy class--this one is Environmental Ethics: The Big Questions, David R. Keller, Wiley-Blackwell, 2010.
I'm going to pick on it. But don't get me wrong: the same points could apply to just about any environmental ethics text on the market. (And similar points go for philosophy of science. Just substitute "feminist approaches" for "ecofeminism.")
The first part of the book consists of short, approximately 1-page answers to the question "Why study environmental ethics?" by prominent writers in the field. This group includes journal editors, authors of important books in environmental ethics, and some of the people who shaped the field in its early days. In this group of 20 authors, 6 are women--and of those 6 women only one writes predominantly about ecofeminism.
The rest of the book consists of 72 selections. 72! Some are historical but the vast majority are contemporary. Out of those 72 selections, only four (4!) are written by women. Oh, but it's worse than it looks.
Of those four selections, three are filed under the heading "Ecofeminism." Ecofeminism is worth studying, and it's certainly worth including in such a collection, but there is a troublesome problem here.
First, there is the inexplicable erasure of what women have written in this field. In the first section of the book, the one that includes short commentaries written specifically for the book, a significant number of prominent women are included. But when it comes to examining the work that brought them to their position--they are not there.
Second, the inclusion of 75% of the women under the heading "ecofeminism" runs the risk of bringing a stereotype effect to bear. When a social group is perceived to be a minority and in a given setting they are vastly underrepresented, then they tend to be judged harsher and more in keeping with established stereotypes than when they are well-represented in the group.
Thus, the inclusion of women as authors of ecofeminism but not as authors in other areas of environmental philosophy makes it more likely that ecofeminism will be perceived as...well, as having all the harsh qualities that are (mis)understood to be part and parcel of feminism. Radical, shrill, marginal... It also indicates that women have no part in environmental philosophy except to speak about feminist issues, which is simply not the case. Thus, it characterizes women as working only in a tiny subfield, and a subfield that is easily read as marginal through stereotype effect.
So, if the goal of including ecofeminism is to be more gender inclusive, then this goal is probably ill-conceived. Within a broader context which is so extremely exclusive, the inclusion of ecofeminism may be more harmful to women and produce more unfair criticism of ecofeminism than should be the case. It tends to exacerbate and reproduce exclusionary gendered practices rather than remedy them.
Finally, I can't help but wonder how such an exclusionary edited text is produced. Even by chance, could I construct a list of 69 readings (not counting those that are ecofeminist) and come up with only one female author (Mary Midgley, in case you were wondering)?
Although the men that I meet in the field of environmental ethics (like the men in pragmatism) tend to have solid liberal values, and profess support for women and minorities, what's sinister about implicit bias is that it need not be intentional. It can be built out of habits and mental shortcuts that give preference to people most "like us." And in areas where "like us" means "white and male," it can take careful attention to counter these tendencies. Thus, I conclude that it is not coincidental that the male editor thanks the following people for their help (by first name):
Michael, James, Holmes, Andrew, Mark, Chip, Clark, Bryan, and Jeff. Plus editorial assistants: Tiffany and Sarah.
Posted by Evelyn Brister at 4:14 PM 1 comment:

Happiness, per se, is not one of my research interests, though who would deny a personal interest in its pursuit? Discussions of the scientific (social scientific? pseudo-scientific?) investigations of happiness researchers seem to come up in all manner of places: my ethics classrooms, my philosophy of science classroom, with my colleagues in psychology and international relations, and in the magazines I read. Most recently, in a Science article on "Measuring Subjective Well-Being."
Subjective Well-Being: that's the technical term for happiness.
You might think that philosophers, and particularly ethicists, would be heavily invested in the project of evaluating what is emerging out of this research field at the intersection of psychology, cognitive science, and economics. After all, ethics is the study of the good life, yes? And if happiness or "subjective well-being" is not one of the central components of the good life, then the good life must be a pretty lousy life to lead.
Environmental ethicists, as I've pointed out, should be following what's going on in the world of happiness research since the environmental challenge of global warming and the technological challenge of decreasing (clean) oil reserves will increasingly force economically developed countries to decide whether happiness can be found without cheap energy.
A quick search of Philosopher's Index found oodles of results for the search term "happiness" ("oodles" being the technical term for more than you'd ever want to search through manually). But only 11 results for the scientific (?) term "subjective well-being" and most of those were not recent (within the last 10 years). The recent ones had been published in journals of business ethics, nursing ethics, and political theory. About the same number of hits came up with the search term "positive psychology," and a notable percentage of those by pragmatists.
Could it be that Philosopher's Index or my search terms are not capturing all that philosophers have said about subjective well-being? It certainly is a subject of interest on the blogs from time to time. (Here's one. And here's one on happiness and raising children. Here's one on using happiness/social capital measurements to supplement measures of GDP.)
One of the central questions in happiness research is whether and how subjective well-being can be measured. (Are we philosophers really leaving this up to the economists to decide?) In order to decide that, it's necessary to identify whether happiness is a unified phenomenon or whether there are various elements that make up an overall assessment of happiness-and whether happiness is culturally defined or a universal attribute of human psychology.
For instance, economists tend to find that money can buy happiness. But psychologists have found that individuals tend to have a personal "set point" which they return to, even after major trauma (limb amputations) or good fortune (winning the lottery).
There is some evidence that various measures of happiness do correlate with one another, which may (but should not) lead to the conclusion that any of these measures can be substituted for another. The simplest measure is, of course, asking people: "Taking all things together, how happy are you on a scale of 0 to 10?" This apparently correlates with:
One of the underlying assumptions of the subjective test ("How happy are you?") is that the answer that is most true is the one that is based on affect, not judgment.
I still have some skepticism about whether there is one thing which all of these reports capture rather than several things which tend to correlate with each other. For instance, enjoying oneself from moment to moment (as measured by time diaries) correlates with an overall subjective judgment ("How happy would you say you have been in the last year?") as does the converse. But I can imagine many exceptions. Undertaking a difficult and tedious but highly meaningful project, in my own experience, can make me feel lousy and unhappy at times. Academic writing and raising children are plausible examples. But achieving eventual success at those very same projects can be the source of meaning that brings one form of happiness to a well-lived life.
My political inclinations applaud the efforts of policy analysts to contrast measures of GDP with measures of happiness levels because doing so seems to expand the definition of "the good life" to include what money can't buy. But my philosopher's instincts warn that this science is too new to be a basis for public policy.
Posted by Evelyn Brister at 2:06 PM 1 comment:

The Future of Philosophy of Science

One group/conference series that has been addressing these same questions is The Society for Philosophy of Science in Practice. SPSP is relatively well-balanced along the lines of gender.
However, the Sydney-Tilburg speaker list leads me to believe one thing: the professional future of Philosophy of Science will be as exclusively a venue for men as ever:

Although the full conference program does include women (a shout-out to Carla Fehr!), apparently they are not the ones that merit mention in the conference announcement.
For a deeper look at the role of conferences in maintaining the gender imbalance in our discipline, see The Feminist Philosophers' Gendered Conference Campaign.
Posted by Evelyn Brister at 10:48 AM 4 comments:

Conservation biologists groan when charismatic megafauna are the face of conservation. Everyone wants to save the panda and the polar bear, but from a biological point of view, endangered grasses and fungi can be just as important.
Still, there can be no doubt that humans share something special with other primates.
In this wonderful story in support of wildlife conservation in Congo, Jeremy Bernstein tells of a magical experience seeing mountain gorillas in the wild:

We moved on and found ourselves in a small cluster of gorillas. The young ones rushed around and brushed up against us. Their mothers watched cautiously. And then something happened that continues to haunt me. There was a mother with a baby. We stopped to look and she held it up for us to see.

How can there be any doubt that these other primates are worth any cost to save them, as individuals and as a species?
Posted by Evelyn Brister at 10:59 AM No comments:

The NYTimes reports on an imaging study that "Trace of thought is found in 'vegetative' patient" and that a method was devised which allowed the patient to communicate simple yes and no answers.

In an editorial accompanying the article, Dr. Allan H. Ropper...warned against equating neural activity and identity.

“Physicians and society are not ready for ‘I have brain activation, therefore I am,’ ” Dr. Ropper wrote. “That would seriously put Descartes before the horse.”

I bet he was waiting a long time to use that line!
Posted by Evelyn Brister at 12:38 PM No comments: