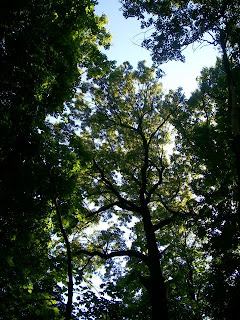 In my neighborhood old-growth forest in the city, one of the black oak logs looks to have 260 rings.  It was a fairly careful count, though the most accurate way of counting rings is to cut and polish a slice of the log--not to count rings in the field. This number is significant because the oldest registered black oak is one with 257 rings, and that one lived in Tennessee.

Here is Neil Pederson's blog, "The Broadleaf Papers," which focuses on the ecology of hardwood forests. These old black oaks that live just up the hill from me are my "Charismatic Megaflora."

Posted by Evelyn Brister at 9:09 PM No comments:

Although we long ago received the grammarian's permission to eliminate the last comma in a list, I've been in favor of continuing with the Oxford comma because there are those situations where it adds clarification. A student passed on this graphic which demonstrates why. (As an internet meme I was unable to find the attribution.) 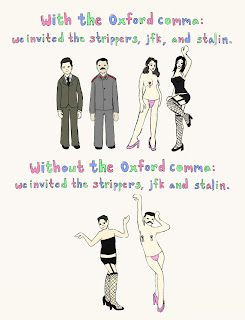 Posted by Evelyn Brister at 11:42 AM No comments:

A Century of Washington Grove

The neighborhood park which has been the focus of some restoration efforts over the last few years is described in the following piece. It's written by "A Friend of Washington Grove," not by me: 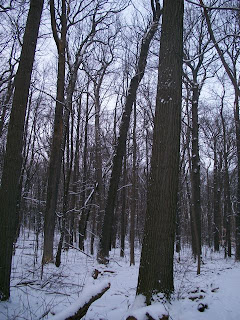 One hundred years ago, Rochester's City Council approved legislation authorizing purchase of the “Cobb’s Hill Woods” as the next component of its rapidly developing parks system. Most of the money raised to purchase the land from the Beckwith Farm came from private individuals who saw the inherent benefit of preserving this treasure. It was the culmination of decades of dedicated efforts to preserve this ancient woodland and its pristine glacial landscape. And 2012 is a double anniversary because 80 years ago this year the Cobb's Hill Woods was rededicated as "Washington Memorial Grove." Here's a little history to enjoy.

In the late 1800s, this popular tract had long been enjoyed by nearby residents and passersby. The woods were already popular for nature hikes, picnics, birding, gathering nuts, and hunting. It was even a longtime hangout for hobos and homeless families. The hill is the site of a centuries old Iroquois portage trail and some of its current trails could be from that pre-colonial era.

But as the city’s population grew so did the demand for the high quality sand and gravel that was available in the glacial soils of Cobb’s Hill. Increasingly, edges around the entire hill was being quarried, dug away and carted to points throughout the City to satisfy the community’s increasing construction needs.

In the early 1900s, the desire to preserve open land for parks met the need to create a second reservoir to serve the burgeoning population and new industry. As a consequence, the beautiful Cobb's Hill Park and reservoir were opened in 1908 and became an immediate success and tourist attraction.

But those public lands did not include what we know today as Washington Grove. The woods were still privately owned by the Beckwith family whose farmhouse still stands at the corner of Castlebar and Winton Roads. Park advocates and preservationists continued to seek protection for the Pinnacle Range, especially the "dingle dell" woodlands on the east side of Cobb's Hill.

In 1911, the City of Rochester commissioned the Frederick Law Olmstead firm to aid in an assessment for a City Plan. The result of that effort was a parks plan that envisioned one long contiguous park from Mt. Hope Cemetery all the across the Pinnacle Hills ending at the Beckwith farmlands at Winton Road. Though most of this land never became a park, in 1912, the City, with the help of private individuals, was able to purchase the “Cobbs Hill Woods” and today we enjoy this great woodland because of the hard work of individuals and a shared community vision.
Posted by Evelyn Brister at 1:09 PM No comments:

At FEMMSS 4, at Penn State.
First plenary session "Where Theory and Practice Meet: Pragmatist Feminism as a Means of Knowing and Doing Scientific Practice."

The speakers each approach the problem of objectivity in science and what a problem-solving feminist response would be. The problem is that empiricist approaches to scientific practice have (with reasonable success) identified ways to improve objectivity by eliminating unwanted bias from scientific research and policy applications.
Shari Clough: Feminist empiricism identifies social, institutional procedures for scientific inquiry which are less likely to produce the kinds of systematic bias which feminist scientists and philosophers of science have criticized.
Alessandra Tanesini: Empiricist commitments undergird the compliance with (obedience to?) the "Green Book" and the "Magenta Book" which contain the rules for civil servants who do social science research. Policies are developed insofar as they are based on standardized research methods and cost-benefit analysis, and the only research models which influence policy are those which best approximate random controlled trials (controls are not often available in social research for ethical reasons, but randomizing trial groups is). (Though Alessandra does not say it, the implication is that these shared methods do manage to prevent poor or unethical research designs, and at least certain forms of inappropriate and biased uptake of research into policy production.)
Nancy McHugh: Evidence-based medicine has become the norm in medical research and the translation of research into clinical practice. (Again, though she doesn't emphasize this, the reason is that prior to the widespread adoption of EBM, clinical practice varied widely and clinicians often did not change or improve the practices they learned in medical school. This resulted in the continued use of out-of-date, unsupported, and ineffective practices.) EBM replaces "intuitive" clinical practices with those shown by randomized controlled trials to be best practices for "average" patients.

But there is also a problem with empiricist approaches. They are successful at eliminating some unwanted bias from policy or practice. But at the same time, they also eliminate the possibility of applying values (which we would not want to call biased) in ways that positively contribute to developing policies. Each of the speakers shows that there is a cost to eliminating/averaging values, such that empiricist science is less accurate than it could be.

Shari: Empiricism doesn't take personal, subjective, embodied forms of knowledge seriously. Example: a woman's understanding of her body's needs when giving birth.
Alessandra: In the development of social policy to address poverty, empiricist research methods and the standardized definition of poverty are skewed toward identifying easy-to-measure quantities (such as income) rather than subjective harms (such as not being able to afford healthful food). In addition to counting some people as poor who can rely on savings rather than income, this approach also devalues the professional expertise of civil servants and the people who perform the research by relying on 'objective' measures rather than researchers' judgment.
Nancy: People who are marginalized (due to gender, race, ability, income status, language, etc.) don't benefit as much from EBM because they are less likely to fit the model of the 'average patient,' in part because people who belong to marginalized groups are less likely to be included in the randomized controlled trials which establish the 'best' clinical practice. The best practices are best for the average or mainstream patient, but side effects are more likely to affect the non-typical patient. This is particularly true because people from marginalized communities are likely to be excluded from RCT's because they suffer from multiple morbidities. (Nancy also brings John Dewey to bear.)
Posted by Evelyn Brister at 11:40 AM No comments:

I'm celebrating the choice that one of my friends has just made to attend Mt. Holyoke in the fall. You'll have a great experience, Phoebe!

At the same time, I'm thinking about the two women in my 30-seat philosophy of science class. Last time I taught the course, there were 3 women in it. And the time before that, only one. The women students at my institution are exceptional. One of the things they learn is that they can't fade into the background, and there is a way in which this serves them well. But this is not a world that is built for them.

From The Washington Post, "Why All Colleges Should Think of Themselves as Women's Colleges"

We need more empowered, educated, wise women involved in making the decisions that will lead us out of crisis. And to lead, it's not enough simply to know things. Leaders must be educated to grapple with the complexities of interdependence and must have the confidence to envision possibilities that others have missed, and then make them happen. Leaders must be able to galvanize disparate groups to solve problems.
These are skills that begin in the classroom, and it’s time for higher education to sharpen its focus on inspiring that vision, confidence and capability among women.


Posted by Evelyn Brister at 11:36 AM No comments: