Part of the fun of “Examined Life” comes from watching these very intelligent people try to make themselves intelligible.

Cornel West, the Princeton professor whose back-seat ramblings punctuate the film (everyone else has a single, uninterrupted minicolloquium), clearly takes great pleasure in talking, and it is hard not to share it, at least in small doses. A man of great, one might say compulsive, erudition — not one to drop the name of a single great writer, composer or sage if five are available — he makes the case that thought can be a kind of performance art.

Showing at the Dryden Theater April 11 and 12.
Posted by Evelyn Brister at 10:31 AM No comments:

A Philosophy of Science Course Blog

This past quarter, I experimented with my philosophy of science class by devoting a large percentage of class time (about 1/3) to student presentations on problems in the special sciences.
What a success! I had a great time, the presentations were fascinating, and we all learned a lot.
Please visit our jointly produced blog--Planet Paradigm--to see the results! It's a treasure trove of links on interesting topics in philosophy of science. There's hardly a monster that we don't cover: zombies, two-headed dogs, bigfoot, and destructive microscopic black holes.
A footnote: my dependence on the Stanford Encyclopedia of Philosophy grows year by year!
Posted by Evelyn Brister at 2:13 PM 2 comments: 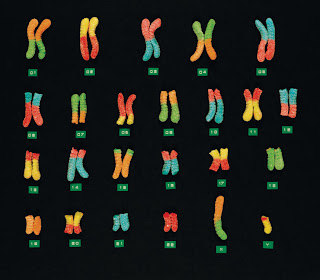 "Chromosomes"
© Kevin van Aelst
Posted by Evelyn Brister at 11:40 AM No comments:

In my philosophy of science class last week I taught Wendy Parker's article on pluralism in climate science. (W.S. Parker. 2006. Understanding Pluralism in Climate Modeling. Foundations of Science 11:49-368) One of the topics that my class is spending a good deal of time on is the unity of science, methodological pluralism, and the more thorough forms of pluralism (metaphysical pluralism?) argued for by Nancy Cartwright, Phillip Kitcher, and John Dupré. This article fit well into that schedule because it examines a case in which the best contemporary science provides incompatible models which are nevertheless viewed as complementing each other, rather than competing with each other.

I expected that the class discussion which might develop out of this case would evaluate whether it is the levels of uncertainty involved in climate science which supports the current pluralism. In principle, at least, more certainty about climate processes and better datasets would be more likely to bring some of these models into actual competition with each other (even though such certainty is out of our reach for the foreseeable future).

But the discussion which actually developed came out of shock that our climate models are uncertain to this degree, that our data about past climate is not more complete, and an examination of whether, failing absolute certainty, the climate change skeptics have a correct assessment. I do not think that the students leaning this way started with any sympathy for the deniers. So, is this a case of a little knowledge being a bad thing?

In truth, I find this reaction to be an extension of the disillusioning about science which is a regular part of the philosophy of science class. The science students are comfortable with the revelations that there is not "a" scientific method, that science is not certain, and that when we want to explain why science is rational and progressive, the structure of its social institutions is one place to look for that explanation. My engineering students are less receptive.

I discovered that it's not wise to talk to smart, engaged, advanced undergraduates about the uncertainty in climate science because, unless they've taken an ecology class (which only 40 students a year at my institution enroll in), they may be completely unaware of the evidence in support of global warming. And if they're not aware of the evidence, they're certainly not able to evaluate it.

I don't think that only scientists can engage in issues surrounding global warming. But my students have taught me, again, how important science education is.

Here's my course blog, where an environmental science student reacts to the class discussion.
Posted by Evelyn Brister at 5:40 PM No comments:

Is it getting hot in here?

RIT is living up to its newly developed self-image as a leader in educating for a green economy. In just the last month, we revved up our program from 0 to this.

I'm participating in two ways:
1. in my philosophy of science class, we're discussing Wendy Parker's article "Understanding Pluralism in Climate Modeling" (Foundations of Science 2006, vol. 11, pp. 349-368).
2. a panel discussion with colleagues from the social sciences. Our comments will be directed by questions from our dean on the ways in which the liberal arts contributes to conceptualizing and addressing global warming.
Posted by Evelyn Brister at 11:02 AM No comments: