In my philosophy of science course, we've been discussing Bas van Fraassen's constructive empiricism and critiquing the observable/non-observable distinction. This movie is an artistic representation of magnetic fields, a useful supplement to our conversation.
The filmmakers describe their work:

Actual VLF audio recordings control the evolution of the fields as they delve into our inaudible surroundings, revealing recurrent ‘whistlers' produced by fleeting electrons. Are we observing a series of scientific experiments, the universe in flux, or a documentary of a fictional world?

Magnetic Movie from Semiconductor on Vimeo. 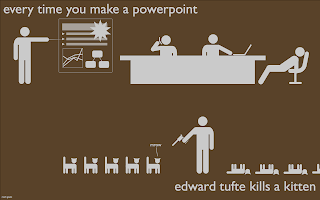 By Mark Goetz.
Posted by Evelyn Brister at 11:15 AM No comments:

PowerPoint: yes, it's ubiquitous. Yes, much depends on the presenter's abilities. Yes, there are other poor presentation methods. BUT...
From the NYTimes:

WORLD
We Have Met the Enemy and He Is PowerPoint
By ELISABETH BUMILLER
PowerPoint has crept into the daily lives of U.S. military commanders and reached the level of near obsession.

This article doesn't pull its punches!

Commanders say that behind all the PowerPoint jokes are serious concerns that the program stifles discussion, critical thinking and thoughtful decision-making.
......

No one is suggesting that PowerPoint is to blame for mistakes in the current wars, but the program did become notorious during the prelude to the invasion of Iraq. As recounted in the book “Fiasco” by Thomas E. Ricks (Penguin Press, 2006), Lt. Gen. David D. McKiernan, who led the allied ground forces in the 2003 invasion of Iraq, grew frustrated when he could not get Gen. Tommy R. Franks, the commander at the time of American forces in the Persian Gulf region, to issue orders that stated explicitly how he wanted the invasion conducted, and why. Instead, General Franks just passed on to General McKiernan the vague PowerPoint slides that he had already shown to Donald H. Rumsfeld, the defense secretary at the time.

Senior officers say the program does come in handy when the goal is not imparting information, as in briefings for reporters.

The news media sessions often last 25 minutes, with 5 minutes left at the end for questions from anyone still awake. Those types of PowerPoint presentations, Dr. Hammes said, are known as “hypnotizing chickens.”

And this news article links to two short opinion pieces in journals, here and here, which I'll consider putting in my next critical thinking syllabus. From the second of these, by T. X. Hammes:

Every year, the services spend millions of dollars teaching our people how to think. We invest in everything from war colleges to noncommissioned officer schools. Our senior schools in particular expose our leaders to broad issues and historical insights in an attempt to expose the complex and interactive nature of many of the decisions they will make.

Unfortunately, as soon as they graduate, our people return to a world driven by a tool that is the antithesis of thinking: PowerPoint. Make no mistake, PowerPoint is not a neutral tool — it is actively hostile to thoughtful decision-making. It has fundamentally changed our culture by altering the expectations of who makes decisions, what decisions they make and how they make them.

Posted by Evelyn Brister at 10:56 AM No comments:

“A lot of people try to make philosophy into an elitist discipline,” says Professor Wartenberg, who has been visiting the school, the Martin Luther King Jr. Charter School of Excellence, since 2007. “But everyone is interested in basic philosophical ideas; they’re the most basic questions we have about the world.”

Gareth Matthews, a professor emeritus of philosophy at the University of Massachusetts, concluded that their curiosity and sense of wonder make children ripe for philosophic inquiry.

“The world is new to them and they want to figure things out,” says Professor Matthews, who has written extensively about children and philosophy. “Young children very often engage in reasoning that professional philosophers can recognize as philosophical, but typically their parents or teachers don’t react in a way that encourages them. They might say, ‘That’s cute,’ but they don’t engage the children in thinking further about whatever the issue is.”

Posted by Evelyn Brister at 10:50 AM No comments:

Friedrich is a Macho Man

OK, time for a confession.
I've tried to take Nietzsche seriously. Really, I have. I even have a gorgeous 4-volume hardbound set I inherited from my father, a Sonderausgabe. I don't give it prime bookcase real estate, but I do hold onto it--you know, just in case I'm ever overcome with a desire to read Human, All Too Human in German.
Basically, the problem is that Nietzsche makes me cringe or giggle--or both.
It's true that the rejection of metaphysics should make his thought attractive to me. And, OK, I get it that he wrote some sensible things, like "All credibility, all good conscience, all evidence of truth come only from the senses" (Beyond Good and Evil).
But what do we do about the misogyny?
"Ah, women. They make the highs higher and the lows more frequent."
Or the misanthropy?
"A subject for a great poet would be God's boredom after the seventh day of creation."
My first exposure to Nietzsche was in an undergraduate existentialism class in which the reading assignment included excerpts from a number of his works. I came into class with the thought that just about everything I had read was a fancy-schmancy way of saying "Let's get high." I didn't detect a great deal of seriousness in it, much less mental stability or even genius. How shocked I was to see the reverence with which these passages were treated! Somehow ironic, given that I had interpreted parts of the assignment as a send-up of hero-worship and a goad to independent thinking and critique.
And then, there is Ecce Homo. Wikipedia:

According to one of Nietzsche's most prominent English translators, Walter Kaufmann, the book offers "Nietzsche's own interpretation of his development, his works, and his significance" (Kaufmann 1967: 201). The book contains several chapters with self-laudatory titles, such as "Why I Am So Wise", "Why I Am So Clever", "Why I Write Such Good Books" and "Why I Am a Destiny".

I've decided that when it comes to Nietzschean scholarship, one can do no better than to turn to the Village People:

Every man wants to be a macho macho man
to have the kind of body, always in demand 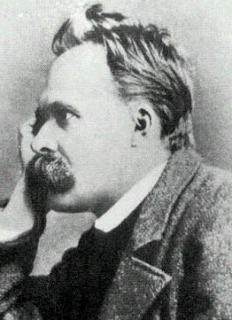 How Is This Not Hypocrisy?

I think it's creepy that some percentage of my e-mail spam comes from paper mills.
How can it not be disturbing, then, to read about teachers rationalizing the propriety of farming out their work to grading mills?

U.S. | April 07, 2010
The Choice: That Term Paper Might be Graded in Bangalore
By JACQUES STEINBERG
If a question about your credit card statement can be handled in India, why can't the scoring of your college term paper?

The argument goes like this: freed from the tedium of grading, professors (as well as teaching assistants) can spend their time on things that really matter. Presumably that doesn't include giving useful feedback to their students. Perhaps this could be taken a step further: the grading mills could write the assignments, too, to increase their efficiency. Oooh, and perhaps they could work together with the paper mills for some overall economic efficiency--a set list of comments could be associated with the various papers it would be possible for students to buy.
This is a sure-fire recipe for squelching creativity. It treats not just students but also teachers and TA's as elements in an assembly line. I would hate to think of my teaching that way! (And in fact, don't get me started on the topic of rubrics...)
Posted by Evelyn Brister at 12:46 PM 1 comment: