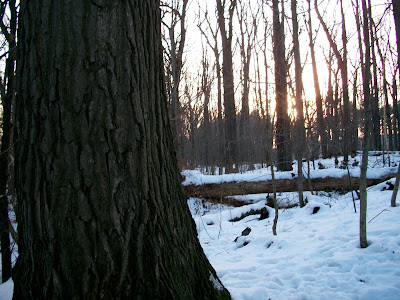 I've been participating in a community-based restoration project in my neighborhood. The agreed upon objective is to restore and maintain a mature (probably old-growth)oak-hickory woodland. The woodland is part of a city park, and the city has had a hands-off management approach. About once a year, paths are cut through the largest deadfalls blocking trails, and the city will take down dead trees that threaten structures on the neighboring properties. The park has dense networks of trails, and it is heavily used in all seasons.
It's also ecologically distinctive. It contains a number of mature butternut trees, which have become rare in the northeast, and some other rare tree specimens. Its majestic red, black, scarlet, and white oaks are close to 200 years old. There are also large tulip trees, hickories, and black cherries, as well as two glacial kettles. Archival photographs and maps indicate that it was never logged.
And, not surprisingly, it contains many, many Norway maples. Lots of autumn olive. Banks of black swallowwort. And garlic mustard looms on the edges. Invasive species are a real problem. Knocking out all the Norway maples, though, would quite possibly cause a noticeable impact in the understory. Members of the project are passionate and, in many ways, knowledgeable about natural history. The project itself, though, is not data-driven.
One of the things that has interested me about the public response to the project has been frequent opposition on the grounds that any form of maintenance or intervention is akin to gardening and therefore "unnatural."
I've heard several people say that they do not mind the idea that the oaks would be overcome by Norway maples fifty years from now. One said that one tree is as good as another--as long as the woodland is green, it's essentially the same. But others have said that they wouldn't mind the transformation because they see that change as part of the natural order. Things change, and as long as the change is "natural," it can be welcomed. Keeping Norway maples out of this grove is viewed as manipulation, and the specific kind of manipulation as driven by nostalgia, a desire to treat this woodland as though it is a museum piece.
What are the politics behind these views? I sense a kind of anti-intellectualism that identifies science with elitism. The concept of "invasive species" is a scientific concept, not a folk category. Moreover, perhaps there is the feeling that a negative judgment against this grove that they have always enjoyed and perceived as perfectly healthy is a judgment against them for not being as attuned as others have been to its ecological fragility. There is resistance to the idea that this grove--or any part of nature--is or could be fragile.
There seems to be an identification of these 50 or so acres as wilderness, despite their location inside the city limits of a large city. Since they're perceived as wilderness, the legitimate response is seen as neglect, not management. Perhaps more trust is put in nature as manager than humans as managers.
Posted by Evelyn Brister at 8:46 PM 8 comments:

Are engineers more pre-disposed to become (right-wing) terrorists than others?
Apparently, violent jihadists are more likely to have been trained as engineers than to have attained degrees in other areas of higher ed. Three or four times as likely. Is this because terrorist organizations have the foresight to recruit highly trained technical experts?
Hertog and Gambetta argue in the New Scientist (and based on a peer-reviewed journal article) that instead it's due, in part, to the personality/cognitive traits that attract certain individuals to engineering in the first place. They found that the reason is

something at the individual level, that is, relating to cognitive traits. According to polling data, engineering professors in the US are seven times as likely to be right-wing and religious as other academics, and similar biases apply to students. In 16 other countries we investigated, engineers seem to be no more right-wing or religious than the rest of the population, but the number of engineers combining both traits is unusually high. A lot of piecemeal evidence suggests that characteristics such as greater intolerance of ambiguity, a belief that society can be made to work like clockwork, and dislike of democratic politics which involves compromise, are more common among engineers.

What we philosophers can take away from this is the importance of teaching ethics to engineers. And teaching it in a way that demonstrates comfort with ambiguity (not the same as relativism) and the difficulty of working through humanistic problems rather than jumping to some supposed take-home message. (My engineering students are the first to ask "Is this stuff going to be on the final exam? And if it is, what's the right answer supposed to be?")
Posted by Evelyn Brister at 1:43 PM 2 comments:

Many helpful responses to my last post requesting references on philosophy and wine. Thanks for those!
So here's another request.
I'm putting together my spring quarter syllabus for a course on those topics in philosophy of science which are more closely related to physics and metaphysics:
But I'm shocked and embarrassed that my draft syllabus has only one female author on it (Nancy Cartwright, of course). It can't be too hard to find female authors, or can it?
Here are the criteria:
--on the above topics or providing a historical setting for philosophy of science or reflecting on the relationship between metaphysics and science;
--not too technical (these undergrads have had only a couple of prior philosophy courses and no physics);
--able to stand on its own (e.g., not a response to a prior article which would also have to fit in the syllabus);
--written by a woman.
Posted by Evelyn Brister at 2:10 PM 10 comments:

Wine Is Made of Yeast and Grapes, Right?

A bleg: I have a student in a philosophy of biology class who is about to transfer into a wine-making program. The course requires an essay or short research paper on a topic of the student's choosing. She'd like to write about wine. I'm open-minded and can see a connection: wine is made of grapes and yeast, chemically transformed and perceived by our senses in concert with complex emotional and cognitive machinery.
Any suggestions for specific questions she could take up or references she could look to?
Posted by Evelyn Brister at 3:19 PM 5 comments:

Philosophy Is Good for Business

BusinessWeek features an article selling philosophy majors as good for business. It's worth a read and is certainly more interesting than other articles in this genre.
I'm torn: yes, philosophy is a good major for anyone, business needs philosophy majors (and not just to pay lip service to ethics), and it's a fallacy to think that the major does or should feed only into law school and philosophy grad school. Still, would I want to fill my classes with the kids who are motivated by hearing that businesses will pay well for "philosophers in pinstripes"?
Posted by Evelyn Brister at 12:27 PM 1 comment: 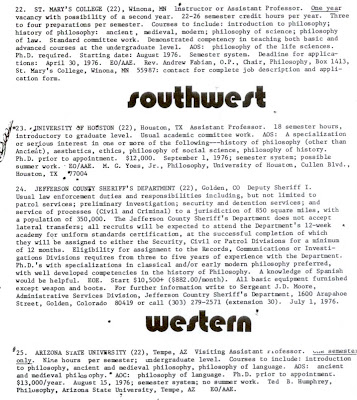 File this one under "history of the profession." (Click the image for a larger version.)
My fellow philosopher of science Jack Sanders tells this story:
I saved this ad from Jobs in Philosophy, sometime in 1976. It was posted by the Jefferson County Sheriff's Department (ad #24). I later heard that the deal was that the Sheriff of Jefferson County had studied Nietzsche as an undergraduate (or something), and wanted someone to talk to. The fact that one had to provide one's own weapon and boots was one of the highlights of the ad among us grad students looking for work... none of the other ads in JiP required that.

I also suspect that this ad may have been one of the motivating factors behind Jobs in Philosophy later changing its name to Jobs for Philosophers, but I guess you never know...
Wade Robison corrects him on one point:
Spinoza! He did his dissertation on Spinoza and wanted a colleague with a specialty in Spinoza. Gerry McCallum at Wisconsin was in charge of the JIP committee then and went up to the room in the hotel to check because it sounded bogus.
Posted by Evelyn Brister at 3:29 PM 2 comments:

Posted by Evelyn Brister at 8:32 PM No comments:

Reminders for a Good Year

At the Feminist Philosophers blog, Jenny Saul reminds us of ten easy things to keep in mind to support inclusive, vibrant philosophical communities. Here's the summary but these make the most sense with Jenny's explanations and the insightful follow-up of the many commenters--so do click through.
1. inclusivity in speaker invitations
2. calling out gender exclusion at conferences or where you see it
3. inclusivity in edited volumes and other invitations
4. include women on your syllabus.

(Oh dear, this seems like it should be the easiest of all but has given me headaches in the past. Now I have a decent collection of article pdf's I can use, even for classes like Modern, where I include women by adding contemporary commentaries to the more typical course.)

5. include women in other curricular matters (prelims, discussion groups, etc.)
6. educate about the psychology of implicit bias, particularly for job searches
7. urge anonymous refereeing
8. acknowledge women's contributions and help
9. acknowledge women. I.e., make eye contact, listen, include in conversations.
10. and again, and again, and again, educate about implicit bias, where it happens, how it happens, and what its effects are.
Posted by Evelyn Brister at 10:30 AM No comments: