But it's a Design school!

My university is not just an engineering school, it's a design school, too. We have very good programs in film, in fine art photography, in industrial design. (We're also getting an architecture program, in spite of having no architects on the faculty.) 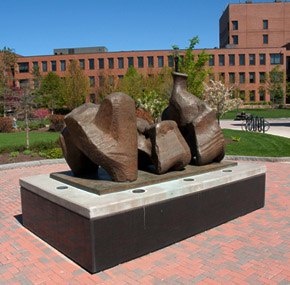 But here we are, #9 on the Princeton Review's list of 10 UGLY campuses! Hey, they picked one of the nicest shots they could for the slide show!
Posted by Evelyn Brister at 3:00 PM No comments:

Two articles about women's representation in the sciences and philosophy have come out in the last week. One is behind a paywall and focuses on women in philosophy and history: http://chronicle.com/article/In-Terms-of-Gender/135306/

The other tracks women's publishing records in the sciences and makes a few nice points which can be generalized to other areas of research: http://chronicle.com/article/The-Hard-Numbers-Behind/135236/
(The most interesting parts of this article come toward the end, so it's worth reading it in full.)

The first of these, which features Sally Haslanger in a photo, goes over familiar ground. For instance, the speculation that women are turned off by the male canon, but with no explanation of why that would hold in philosophy but not English. And the Rutgers female graduate students' defense of their department, in which they say


their views are taken seriously, they are supported by faculty, and they in turn are role models for undergraduate women.

If this is true, then what more could one want? One may doubt their word, but it seems entirely conceivable to me that a department may be woman-friendly without anyone doing specific work in feminist philosophy. Feminist work is important, but it needn't be done everywhere--there are good reasons for a department specializing. The proof is in the success and well-being of the women faculty and students.

Another familiar idea to explain the absence of women makes its appearance:

"Philosophy, in the English ­speaking world, has migrated closer to the sciences, and places a high premium on technical skills, logic, and dividing problems into lots of small pieces," Mr. Leiter says.


But this ignores the prevalence of women in the sciences, including in those areas, such as molecular biology, biochemistry, and chemical engineering, which use technical skills and highly specialized problem areas. Women make up over 50% of undergrads in the life sciences and a larger proportion of majors in chemistry than in philosophy. What it does do is to put the blame on women for being underprepared or selling themselves short. What it doesn't do is take responsibility for the social environment, which is a sufficient explanation for philosophy's shortfall.

The article on women's record of publishing in the sciences is more sophisticated and offers a more complex picture of women's changing status. Women are not let off the hook--the article suggests that they submit fewer papers to journals. But this observation is situated in the complex social setting women find themselves in, for instance with obligations for childcare and eldercare and different expectations for non-research academic work.

The article also shows some of the simplistic thinking that comes to the fore when we discuss the status of women in research, even by people whose other professional work is supremely complex and nuanced. For instance, there is often an assumption that if women aren't facing active, open hostility and obvious discrimination, then nothing is wrong. In that case, any choices they make to cluster in subfields, to publish at lower rates, to collaborate less, or to accept a lower author ranking are chalked up to their own lack of proficiency rather than the social setting.


John J. Siegfried, a professor emeritus of economics at Vanderbilt University who has worked with the economic association, says there is not much that academe can do about gender imbalances, short of forcing women into subfields that may not interest them. "What's the solution?" he asks. "Should I tell women starting a Ph.D. that they should only study finance or econometrics?"

It can seem obvious to the women who consider work in certain subfields that it is controlled by crony networks, or that newcomers are more or less welcomed. This is one of the phenomena which is the target of the Gendered Conference Campaign.

Posted by Evelyn Brister at 2:54 PM No comments: