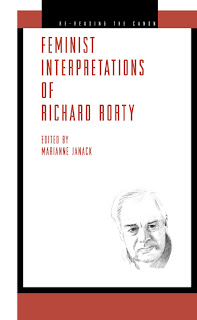 The Re-reading the Canon Series from Penn State Press has become much larger than I realized! And it's been growing for nearly 20 years.

The titles are "Feminist Interpretations of X," and they cover the canon stalwarts (Plato, Aristotle, Descartes, Hume, Kant, Hegel) as well as some surprises (Emma Goldman, Ayn Rand). Some recent additions include Thomas Hobbes, Jane Addams, and Richard Rorty.

As I prepare my spring quarter seminar, I turned to the series to see if there is a collection on Mill. Apparently not! Quel dommage.


Posted by Evelyn Brister at 12:57 PM No comments:

I'm preparing to teach an undergraduate course on John Stuart Mill. This is an excuse for me to spend 10 weeks re-reading some of my favorite history of philosophy. It's also part of my program to teach in ways that highlight women philosophers--contemporary and historical. I came across this little piece (from 2009) by Jo Ellen Jacobs about the nature of John Stuart Mill's collaboration with Harriet Taylor.

The abstract (from PhilPapers):
On Liberty celebrates a collaborative theory of knowing exemplified in the way Harriet and John worked together. They believed fervently in the power of individuals struggling together to grasp the truth – including both the “idealistic” belief that there is truth as opposed to mere subjective opinion, and a deep scepticism about the beliefs accepted by the majority. 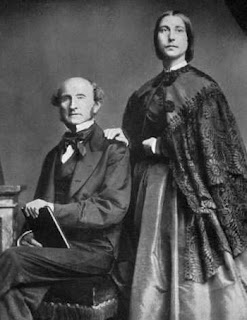 Posted by Evelyn Brister at 11:30 AM No comments:


By David Brooks in the New York Times.

What Data Can't Do

Data obscures values. I recently saw an academic book with the excellent title, “ ‘Raw Data’ Is an Oxymoron.” One of the points was that data is never raw; it’s always structured according to somebody’s predispositions and values. The end result looks disinterested, but, in reality, there are value choices all the way through, from construction to interpretation.

(from Will Krieger)
Posted by Evelyn Brister at 1:39 PM 1 comment: