Ah, what a show we had earlier this summer. This one became more entertaining than anyone could have guessed. And enlightening. Who else is on that list, I wonder?
And where will he work next? Somewhere--someone will look out for him, as this letter shows. Sadly, that's how this family works. One hopes it will at least be a position without graduate students.

Now that it's been a couple of weeks and the chuckling is over, it's time to recognize the underlying grossness of it all. Start here.
Posted by Evelyn Brister at 2:37 PM No comments:

The recent news about sexual harassment in philosophy has been bringing exposure (so to speak) to the problem--not to mention providing an awful lot of intentional and unintentional amusement.

Myself, I have not experienced (prolonged episodes of) sexual harassment at work. Even if common, it's not ubiquitous. Harassment, though, appears with regularity--either of myself or observed harassment of others. Gender is often a component, defining the target, the methods, the vulnerabilities.

But sometimes a great long span of time goes by--months, even--when I'm not harassed, and I don't hear reports of harassment of students and colleagues. But even in these intervals, there are the micro-insults, the patronizing gestures, the imbalance between duties and privileges.

I'm knowledgeable, aware, and sensitive, and I usually spot the insults, jibes, barbs, slurs and slights that are directed my way. Every now and then someone around me notices one I miss: "Did I hear so-and-so say that to you?" someone asks. Or I report on a frustrating encounter with a male student, and a male colleague says "No, I've never, not in 20 years, had a student say that to me."

An episode today. Dean asks a question of a committee I'm likely to chair in the fall, copies the full committee and the department chairs--and also copies Prof. Graybeard, past committee chair but no longer a member. I respond to the question. Dean acknowledges response. Prof. Graybeard, copied to all, supports the correctness of my response. I'm grateful.

Until a department chair asks me: "Why was Prof. Graybeard copied on that? And why did he respond? What did his response add?" Was it supportive? No, undermining.
Posted by Evelyn Brister at 11:33 AM No comments:

I have a problem, and maybe you can help me--because you know more about facebook than I do.

I work with a group to foster conservation and preservation in an urban old-growth forest in Rochester--Washington Grove. You may have seen me write about the work in the Grove before, e.g. here and here.

The group has been operating since about 2008, and although we coordinate with the City of Rochester, we are not incorporated as a non-profit. Our grants and fundraising is funneled through other organizations. For instance, the City of Rochester has a fund set aside for reforestation, and donations to the fund are tax-free. We've raised over $3000 for that fund, and it is informally earmarked for work in the Grove.

But before you "Like" it, hear my problem. The person who started the page (and is the admin) has left our group, and though he shares our goals to appreciate and preserve this forest, he is not committed to updating the page and is not willing to relinquish control of it. He may have more malign intentions towards the group than mere neglect--I'm not sure. (Politics is not my forte.) Facebook seems like as good a means as any to announce our once-a-month volunteer workdays, to post photos of the trees we've planted, and to build support for this project.

What to do? Report the page to facebook? Under what description? As hijacked? What can of worms does that open? Would it be worth starting a new page instead? Or first? 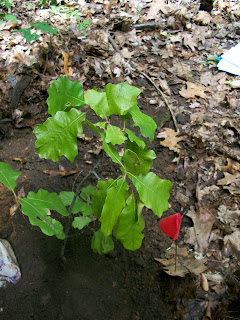 What's "Meant" Prior to "Assesment"?

I'm part of a "faculty team" that is working on assessment of a new general education requirement in ethics education.

In principle, I'm not opposed to there being an additional layer of accountability when it comes to course content and teaching effectiveness. I could imagine assessment procedures which could be used to hold faculty accountable against those hobgoblins that threaten higher education--grade inflation, the pedagogy of rote learning, deadbeat professors, arbitrary grading. And I can imagine procedures which faculty could use to gather evidence to make demands against administrators--for smaller class sizes, for  highly qualified teachers, for professional development and other kinds of support to improve classroom teaching.

But from what I can tell, the game of assessment involves developing a show that provides cover on all sides. One goal is to make it as simple as possible for faculty to perform, but the results are so shaky and obscure that the results could never be used to support demands. It neither requires nor builds respect between administrators and faculty.

Here is a snippet of conversation from my meeting yesterday--6 excellent professors in the room with the director of assessment.

Professor: How were the members of the assessment team chosen?

A. Director: We try to pick professors who are credentialed and qualified in the assessment target.

A. Director: Of course, some of the people we ask are unable to participate because they are engaged in research or other important projects.

Me, out loud now: Oh yes, I've heard of those people who do research, but none of us here do research or have other important projects going on. No, not us. Our lives are practically empty.


Here's a nice piece on the failed logic of assessment. By a philosopher, of course.


Posted by Evelyn Brister at 1:39 PM No comments:

I've taught the main idea of John Stuart Mill's "On Liberty" before--in introductory level courses. I've taught his separation of cases argument against government suppression of free speech. And I've taught Liberty in a way that incorporates a discussion of freedom of action and specifically victimless crimes.

But one of the questions that I had, going into teaching this course, is whether "Liberty" is supportive of the variety of political thought that in the news media gets called libertarianism.

I'm far from an expert on contemporary libertarianism. I know that it comes in liberal and conservative flavors, and that libertarians from the right and from the left sometimes find mutual support. Libertarianism.org, for example, houses information about Mill, and The Liberty Fund archives Mill's collected works at http://oll.libertyfund.org/?option=com_staticxt&staticfile=show.php%3Fcollection=46&Itemid=27.

In my course, one very good and politically engaged student was conservative but had mixed commitments to libertarianism and communitarianism. He was mostly supportive of Mill's ideas and, when critical, usually viewed Mill's philosophy as tending to undermine social order and tradition. Another student was liberal in a distinctly libertarian way. He, too, found that Mill's political philosophy fit his own ideals.

But after a close reading of "On Liberty" and of some of Mill's other works, I have a difficult time seeing how Mill's commitments can provide the basis for contemporary conservative libertarians who would like to see less government, a reduction in government entitlements (usually with no reduction in government support for corporations), and a very low taxation rate and regressive tax scheme. Mill even seems amenable to limiting civil liberties in some cases if it is in the long-term interests of society.

In fact, Mill's individualism seems nearly completely secondary to his collectivism. The reason he supports individualism is for the very good reason that the way to develop the greatest potential in society is to develop the potential of its individual members. For example, he supports compulsory education at a time when it was controversial in England. And he is against limiting the choices that individuals make because in doing so we limit our possibilities for future growth. We should allow people to make mistakes because some of the different and unusual ideas they develop in their experiments in living will be better for society as a whole.

This is far from selfishness or egoism, and it is also far from saying that government has no business in people's private lives. The state does have an interest in how people develop their private lives, and its interest is to clear the way of obstacles to having the widest possible range of choices in how to live  (so long as people's choices do not harm others). The state has this interest because WE are the state--the commitment to participatory democratic governance is simple and straightforward. Further, there even seems to be a duty (or a consideration of beneficience, at least) to GIVE BACK to society, or to develop oneself for the sake of benefitting others, including the people of the future.

I had wondered if the individualism of "Liberty" was in conflict with the collectivism of "Utilitarianism." I think the relationship is this: an iron-clad commitment to the liberty of individuals is a pre-requisite to developing a society with the greatest sum total of happiness, and especially for the development of higher pleasures. One needs both freedom and security in order to write poetry. Mill comes back again and again to the idea that society has, can, and will progress. But that progress is built on two things: first, that people have liberty to change their lives in ways that are an improvement over past ways of living; and second, that they are motivated to develop and build the society, as a collective, rather than (just) to tend their own self-interests.
Posted by Evelyn Brister at 3:57 PM No comments:

My Mill Course: A Recap

For the spring quarter I taught a 10-week course on John Stuart Mill. Time to look back, or as we now say, "to assess." I asked to teach this course because I've admired Mill but am not an expert and was looking for a way to increase my expertise by a notch.


Expectations, Met.
Expectations, Failed.
Expectations, Exceeded.
Although I got to know him better than I had even hoped, my appreciation of Mill was not diminished after 10 weeks of intense study. I learned much more about his faults (and especially the inconsistences of his application of his views to the issues of his time), but I also saw the value of a philosophical life spent developing a thoroughly comprehensive and consistent view.
Posted by Evelyn Brister at 3:22 PM No comments: